This engraving represents a Protestant clandestine assembly in the “Desert”.

At the edge of a forest, the participants are gathered around a pastor who preaches from a dismantable pulpit.

The revocation of the Edict of Nantes, decided in October 1685 by King Louis XIV, abolished the regime of tolerance instituted in 1598 in favour of the Reformation. About a quarter of the 800,000 French Protestants left the kingdom, defying the decrees that forbade them to seek asylum in the Protestant countries of Europe.

Those who remained were forcibly converted, but many resisted at the risk of being jailed, condemned to the galleys, or even executed. They gathered clandestinely to pray in secluded places called the “Desert” and secretly maintained a church network during the 18th century. 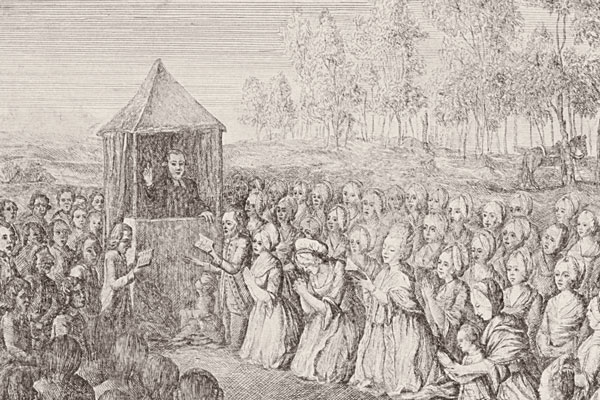 L. BELLOTTI, based on Jean-Jacques Storni, Assembly in the Desert, copper engraving, 1775.