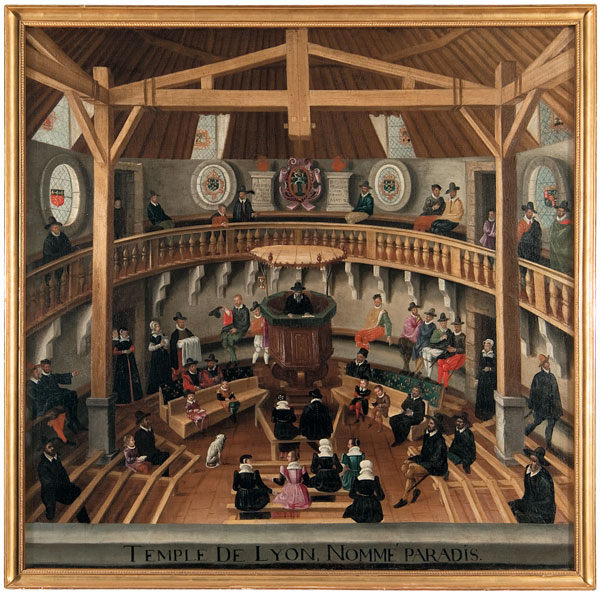 The painting of the Temple of Lyon called “Paradis” in the Bible room is one of the most remarkable items of the Museum. The painter, one of the leading 16th century Reformed artists, included many fascinating details.

The dog is a familiar figure in Protestant engravings, so it comes as no surprise that man’s best friend was included in the painting of the Temple de Paradis exhibited at the MIR. It is thought that the dog symbolises loyalty, the cardinal virtue of the Reformation, but the presence in the Temple of an animal that is considered impure could also emphasise that the church, in a Protestant perspective, is not a sacred building.

This painting was probably created by Jean Perrissin, who is also the author of various engravings also exhibited at the MIR in the Barbier-Mueller room, featured in “Forty Paintings or Various Histories Concerning the Wars, Massacres and Troubles that Occurred in France…“. The Temple de Paradis may have been painted a little while after its destruction. Built in 1564 in Lyon, it was demolished three years later as the religious wars resumed in France.

This painting is one of the very few visual testimonies from the early days of the Reformation in France. This is the oldest representation of a Protestant temple. It is highly different from Catholic buildings: the architecture is designed to help the faithful listen to the pastor who is featured in his pulpit in the centre of the painting. A small hourglass on his right is here to remind him that he must soon end his preaching! The faithful who surround him move about freely throughout the building. Men – some of them carrying swords –  women, children come in, go out,  chat…About fifty in all, immortalised in various attitudes underlining the diversity of the community.

Nevertheless, there is a sense of social hierarchy: some parishioners enjoy the comfort of a proper chair with a backrest, while others have to sit on uncomfortable wooden boards. As for the women, they sit in what seems to be a specific area, just as children who are sitting with an open book on their knees, perhaps a catechism or a psalter.

It is not clear what ceremony is taking place in the Temple. It could be a wedding, as indicated by the characters placed a little behind the pulpit, or a baptism, with the arrival on the left of a couple carrying an ewer (a tin container filled with water) and a towel. But the child to be baptised is nowhere to be seen! Or perhaps it is the couple sitting in front of the pulpit that is about to be baptised? This would not be a strong hypothesis because Anabaptism was not a topical issue in Lyon at that time.

The presence of fleurs-de-lis (stylised lilies that served as emblem to the French crown), alluding to power and royalty, are featured on both the gallery and the backs of a few benches. Jean Perrissin, who was a Protestant, probably wanted to explicitly recall that the Reformation had no political objective and was loyal to the King of France.

“We do not cease to pray to God for your prosperity and that of your kingdom,” wrote John Calvin in his Epistle to King Francis I, which was the introduction to the first edition of the Institutes of the Christian Religion, which is also on display at the Museum.

This painting of the Temple de Paradis, on loan from the Geneva Library, underlines the dual mission of the Reformers who were both translators and interpreters. It is rightly pointed out that one of the main achievements of the Reformation was to make Bible reading more accessible by promoting its translation into the vernacular languages of the time. But Reformers were quick to observe that these 1500-year-old texts had to be interpreted, to avoid selective readings that could lead to a number of slip-ups or initiatives that were more revolutionary than reformed, such as the destruction of images in the name of the 2nd Commandment or trying to establish of the Kingdom of God on earth based on a radical reading of the Sermon on the Mount.

Reformers as important as Luther and Calvin very quickly understood the dangers of letting people read the Scriptures without guidance and adjustments. Founding universities as training centers in theology was very important to Reformers, who considered them to be remedies against an overly individualistic reading of the Bible.

From his pulpit, but summoned by the hourglass to take into account the concentration capacities of an audience that one feels has slightly dissipated, the Reformed pastor explains the Bible and proclaims its truth,  based on his interpretations impacted by the ideas of his time. The painting of the Temple de Paradis helps understand how important it was in Reformed Christianity to spread Scriptural messages as widely as possible, even to dogs “who eat the crumbs that fall from their masters’ table” (Matthew 15:27).